It was in 1996 that I legally changed my name to Surrena after a life-changing divorce. A shaman whom I loved and studied with suggested the name to represent the energy and sound of the word surrender. Sunny is a nickname that spontaneously happened in a Core Power Yoga teaching training in 2006. Both names represent my complete self, both the yin and the yang, which contain the aspects of surrender, stillness, and peace, as well as inspired action, represented by the sun. 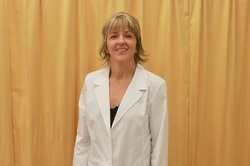 Growing up in New Hampshire in a family of six, we all involved in sports and music. By age nine , my mom gave in to my constant pressure to give me gymnastics classes, which took over my life. A late entrance into puberty (age 15) ended gymnastics and so started swimming with West High: . We got access to the pool from 9-10 pm M-F, I would get home about 10:30 pm. Three years later I received a full ride to swim at Virgina Commonwealth University (VCU) in Richmond, VA. Attending practice twice a day was a huge commitment, and so water became my home. Academically, I was drawn to anatomy, physiology, and sports medicine, but ended up with a bachelors degree in general studies.
After college I moved to Las Vegas with a boyfriend in 1991; there was nothing happening for me in Massachusetts. First I taught preschool for one year , then was a lab tech for one year, and then a busboy at Andre’s French restaurant, Andre and his staff treated me like family there. Finally, in 1995, I began to listen, trust, and follow my heart, which led me to the School of Healing Arts in San Diego. Giving and receiving massage every day for two years seemed like a good idea; the Holistic Health Practitioner certification was a natural outcome and the easiest decision I ever made.

In Dec 2011, I completed a double master’s degree in acupuncture and Chinese herbal medicine; the program included three years of clinical experience both at the school clinic and externships. There I specialized in orthopedic acupuncture and seniors. Chinese medicine is both ancient and modern, subtle and powerful, painless and transformational, but it is not for everyone. The truth is, healing and wholeness are not techniques, they are ways of being. All modalities are helpful; they lead back to the same place, which is being home in one's heart.

Skipping to now, I was brought into Scripps Hospital on 7-24-2017 , flatline, with a non traumatic brain injury/ hemorrhage. I was in ICU for 2 weeks, then upstairs for a week, then admitted to Cottonwood Canyon in El Cajon Healthcare Center 8-15-17, where they helped me re-learn balance and speech. I was there for 5 weeks. Then I moved to Cedars Assisted Living in Paradise Village, mid September, and finally moved into Independent Living April 15, 2018. These past 4 years (as my anniversary is coming up in 2 weeks) has been a brand new life, and a wild ride. Understanding my neurophysiology, and healing it, has been my priority. I took myself off 7 medications, against some doctors wishes (although my neurosurgeon totally supported that!) . These past few years with the global crisis, I was somehow awarded with more time to heal my nerves. It’ll continue be a lifelong bountiful journey, one that I never could have asked for, but has truly given me a brand new start. Gratitude cannot encompass the overwhelming infinite blessings that have been given to me! Realizing that an all encompassing safe home, one of mind, body and heart, when fused together, can bring radical faith to all of humanity , and the beauty of divine light and divine grace, that are available to us all.